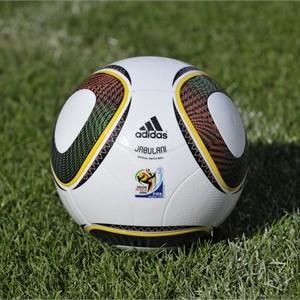 My first wish before take off to Japan is : I can meet Jabulani in Japan. Everybody in Indonesia should have to say that they can enjoy world cup costless, freely. All 52 matches are live by free. Some major match is also taped in other schedule. Although there are many cigarette advertisements during the game, football lovers got everything in the tournament. We can see how hard goalkeeper catch jabulani, a high tech design soccer ball from adidas. We can hear the noisy vuvuzela, like a hive of bee around our head. But not here in Tokyo.

At the first time I hear the word “jabulani”, my memory runs to Jambumangli, huehehe…first, I’d like to announce about Jambumangli. He is a gigantic person who live in Alengka Kingdom. His cousin, Sumali, is the King of Alengka. Jambumangli described as a sacred person who be a guardian of the beautiful Sukesi, Sumali’s daughter. Everyone who want to marry Sukesi, he should face Jambumangli. In the end, a hermit named Wisrawa, defeat Jambumangli in order to be Sukesi’s husband.

Then, what about Jabulani? Hehehe… its not a name of wayang. Jabulani, which means ‘to celebrate’ in isiZulu language, is the 11th edition of adidas’s FIFA World Cup balls. The 11 colours that are present on the Jabulani represent a colour for each team player, every official South African language and for each of the 11 South African communities that will welcome the world.

Is Jabulani the most comfortable ball to play? Jabulani comprises eight thermally bonded 3D panels that have been, spherically molded to make this ball a perfectly round football that is more accurate than ever before. But, based on some goalkeeper testimonies during pre-tournament friendly matches, Jabulani is a wild ball to save. As statistic says during group stage, 133 goals have made in 54 matches (more than 2 goals per match) indicate that Jabulani is not good for the goalkeeper. But many failure on penalty kick is also indicated that Jabulani is neither good for striker. That was the reason why Fabio Capello said: this is the worst soccer ball ever. hehe…

Is less goals made caused by vuvuzela’s noise? There are no valid relationship between sound of vuvuzela and goal productivity during WC-SA 2010, hehe… is vuvuzela noise bother you enjoying the game? If your answer is yes, it means we are the same. Vuvuzela is a typical 65 cm plastic blowing horn that produces a loud, distinctive monotone Bb note. Vuvuzela release a loud of 130 dB, an intensity that louder than ambulance siren (120 dB), whistle blow (110 dB), and get near to jumbo jet engine at take off position (140dB). Vuvuzela has become a symbol of South African soccer as the stadiums are filled with its loud and raucous sound that reflects the exhilaration of supporters. The constant use of vuvuzelas during the World Cup introduced problems and criticism. Xabi Alonso, the Spanish midfielder, said, “Those trumpets? That noise I don’t like. it is not nice to have a noise like that”. Ironically, although this sound instrument well known as South Africa traditional, most of vuvuzela which blown in South Africa are produced in China. Hehehe…

Then, why I’m very happy to find Jabulani in Tokyo? It about how hard to find world cup live game in Japan. Free on air live game are serve by NHK, but they’re only 22 matches and reported in Japanese. Complete matches were provided by Satellite tv pay per view, Sky Perfect TV and also reported in Japanese. In some point, many restaurant arrange a large screen live match for a 2,000 Yen fare each person, too expensive. Only one solution to enjoy live game of WC-SA 2010, freely and in english: live streaming from the internet. And for this clue, I didn’t prepare because I leave my notebook in Jakarta. I think, world cup 2010 has already finished for me. But it’s not true, I finally find Jabulani in Tokyo.